20+ Times Librarians Proved To Have The Best Sense Of Humor

Libraries are places filled with knowledge and librarians are normally portrayed in Hollywood as staunchly old women with no humor and constantly nagging people to be quiet. However, the following pictures show that that’s not true at all. Although, you really should be quiet in a library.

25. A person was working at the library when his phone rang so he went outside to pick it up. When he returned this was on his computer: 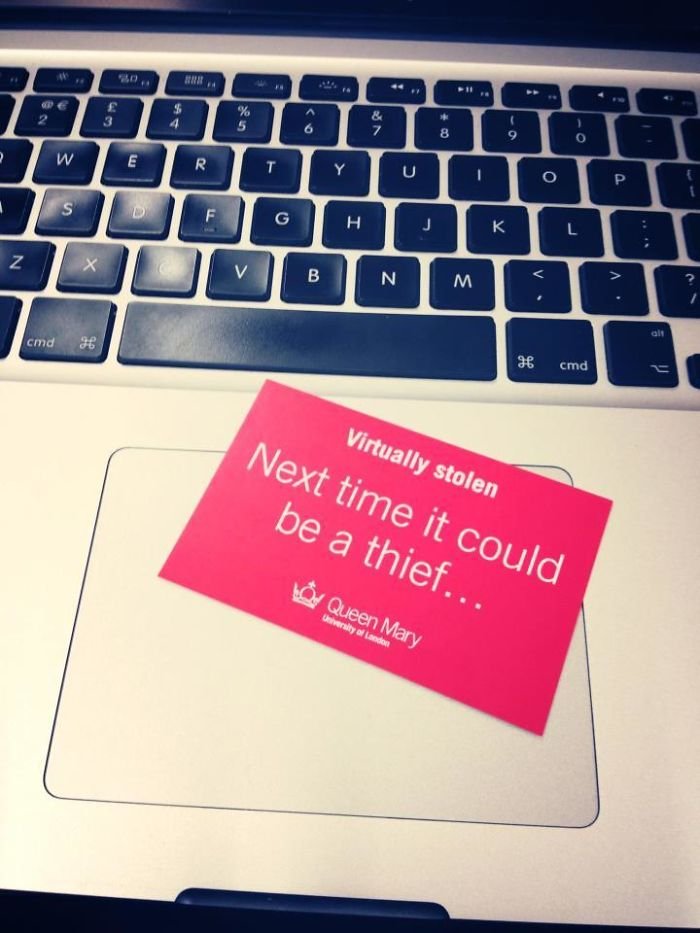 24. This sign was seen in a school library. Time to save all your files! 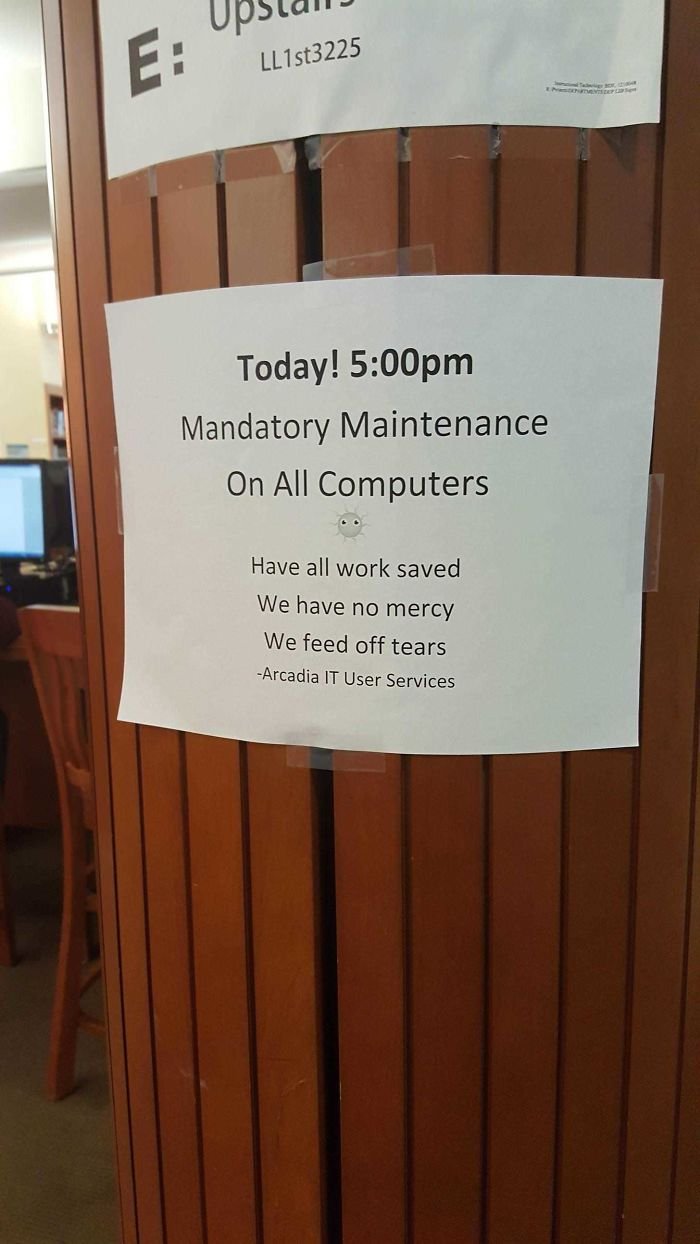 23. No one is better at puns than a librarian. No one is ever overbooked either. 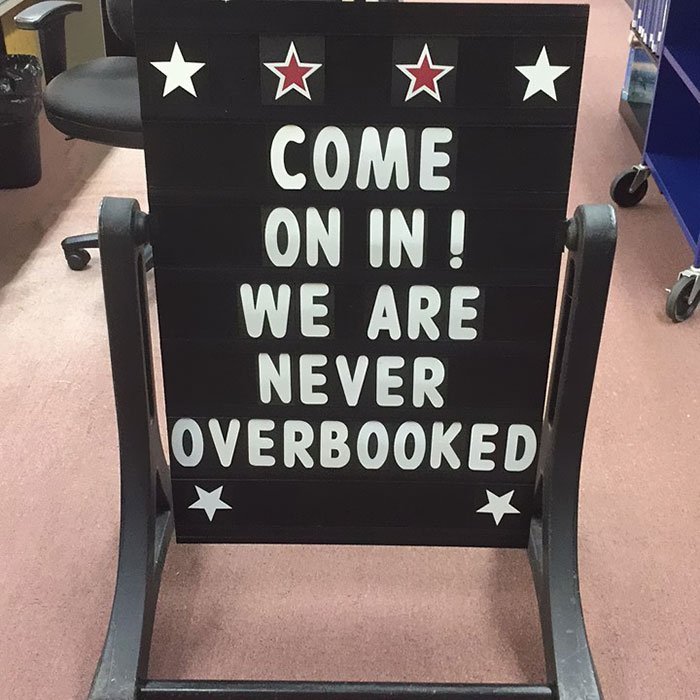 22. This library decided to make a pun with 'Star Wars' characters. Han Solo and Wookie are always together. 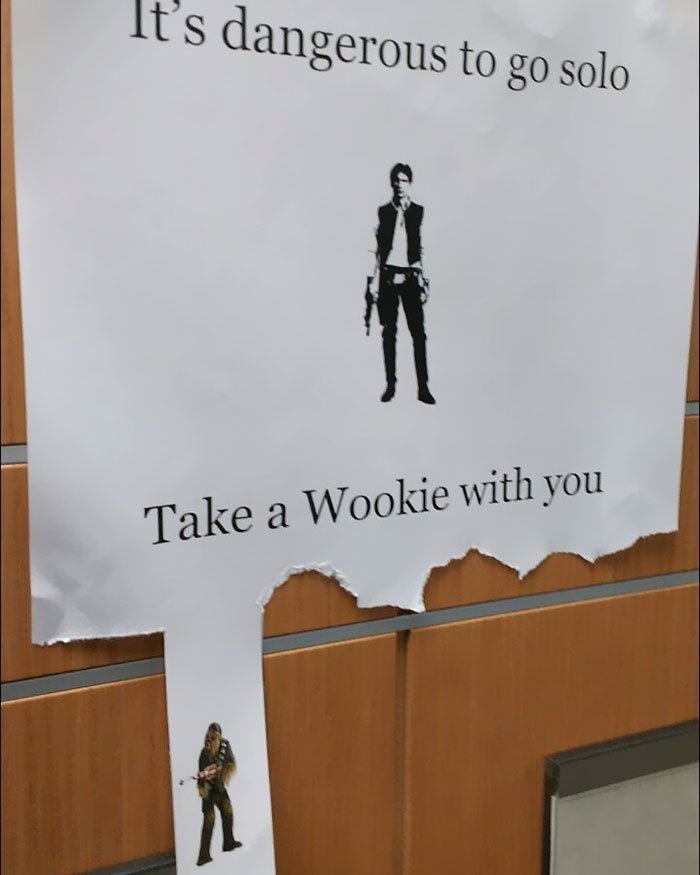 21. This library tried using a 'Dr. Who' reference. They're right, though, nothing is more potent than knowledge. 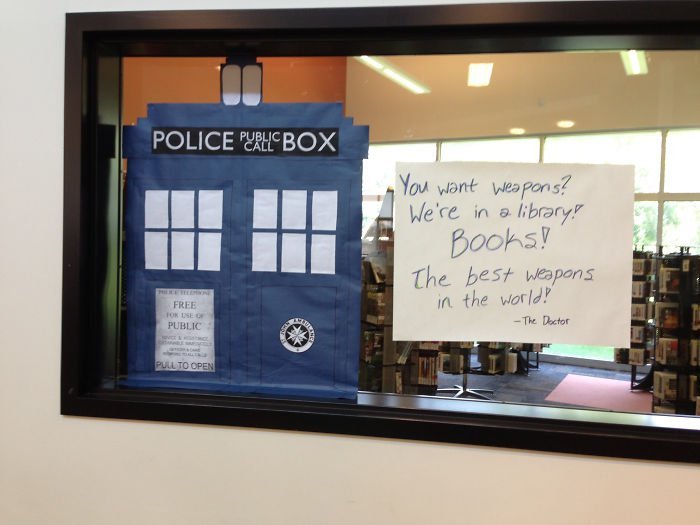 20. A student lost his turtle at the library and he was found like this. The librarian swears that this picture was a total coincidence. 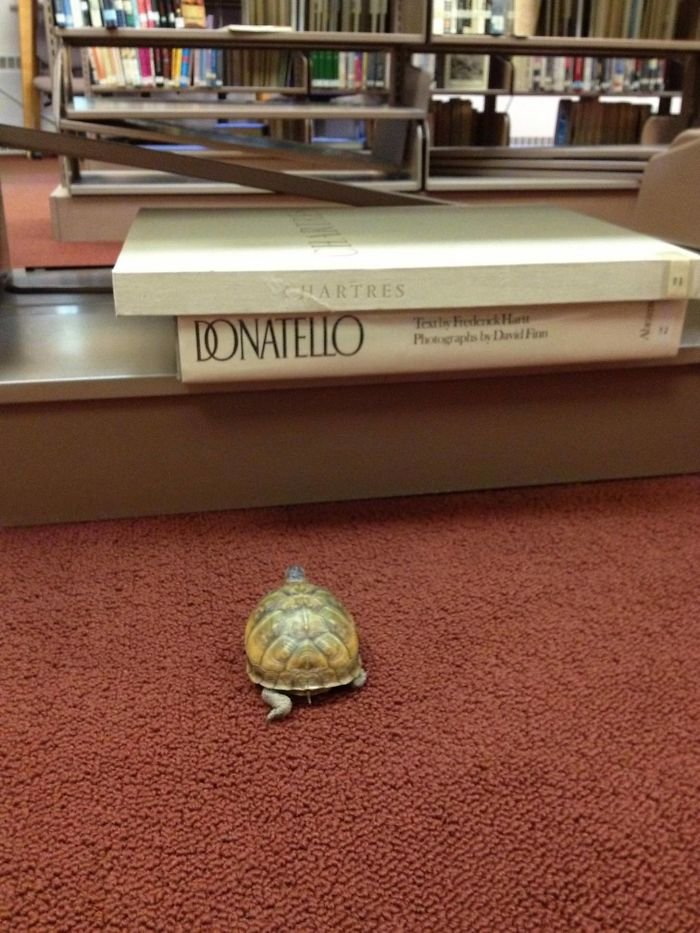 19. People who read will always love silly jokes like this one. 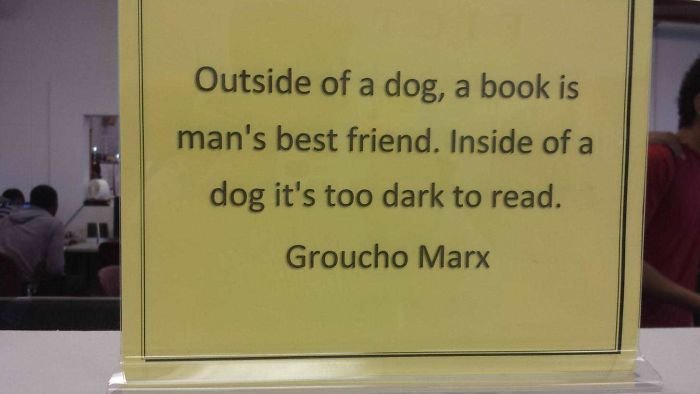 18. Another pun but this time using a mirror as 'Self Checkout.' When you're a book nerd but need to check your appearance. 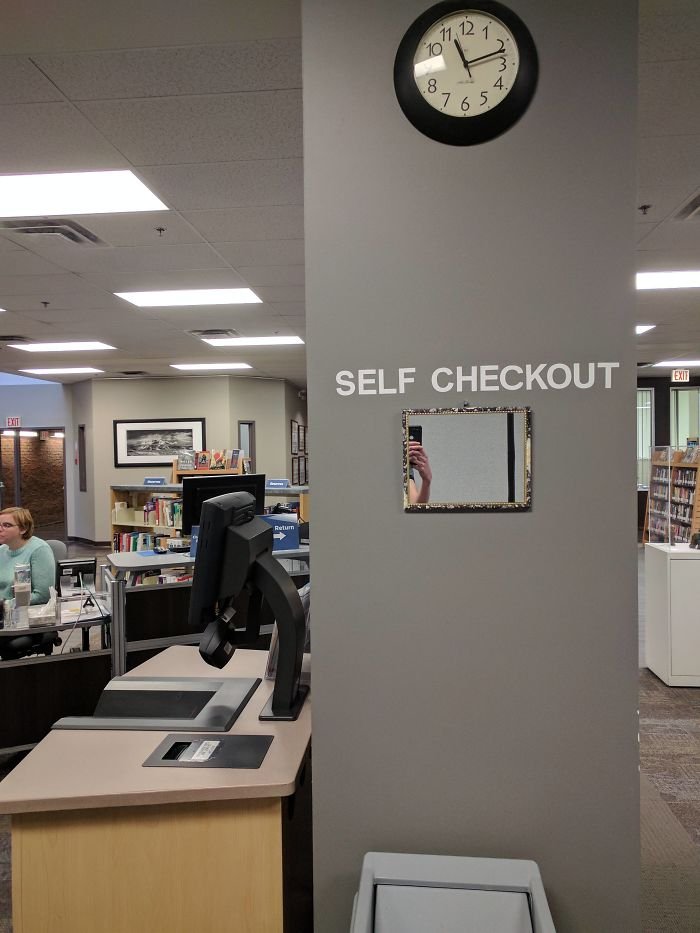 17. A person found this beautiful writing desk at the Newbold College Library. They also found this message in the drawer. 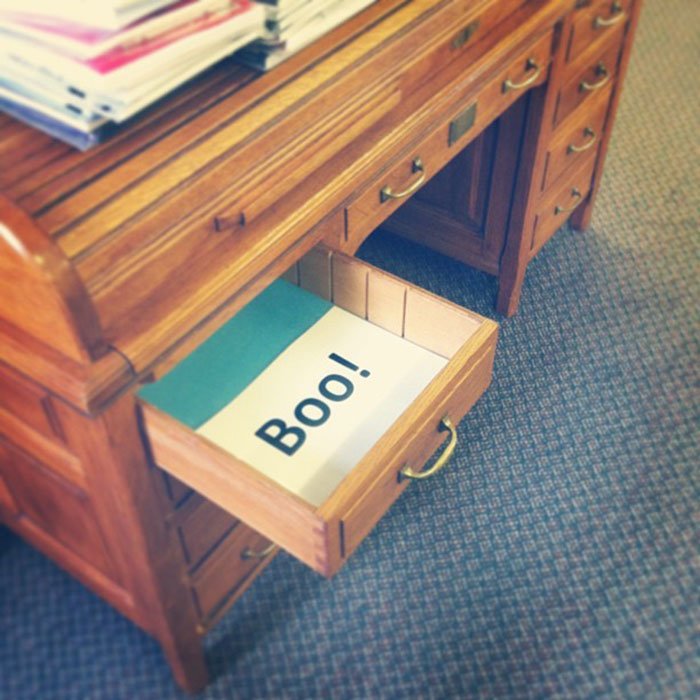 16. This library rewrote the lyrics to Sir-Mix-a-Lot's 'Baby Got Back' so that it would fit with books. 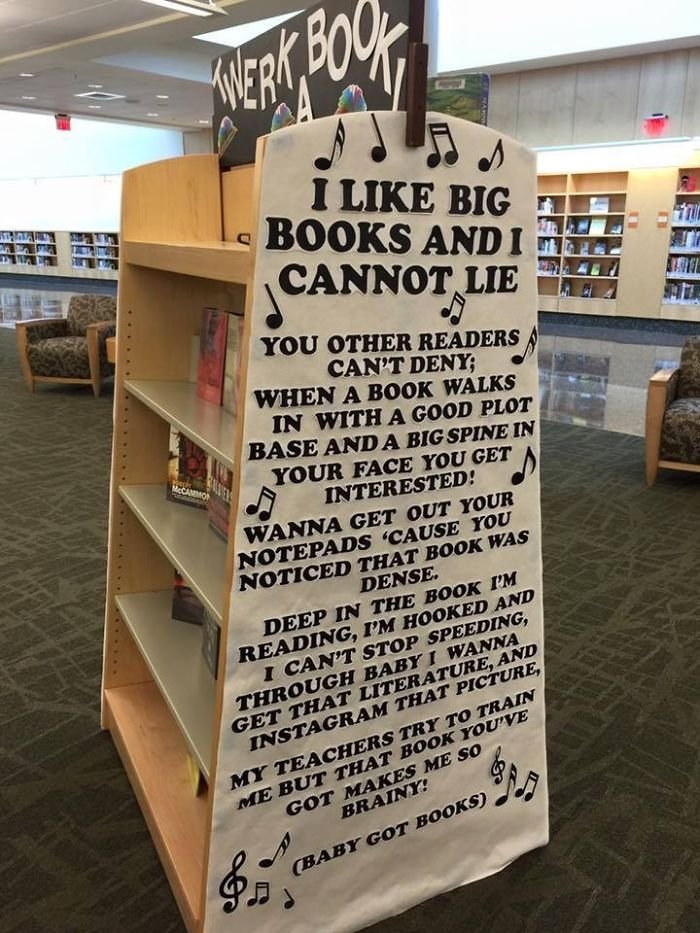 15. This library states the importance of knowledge. An interesting thing to know! 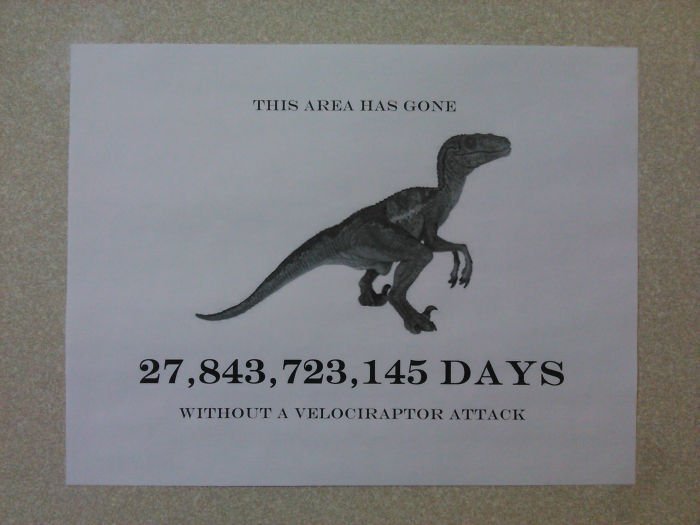 14. The U.S. Counsellor Kellyann Conway used the phrase 'Alternative Facts' to defend the false number of attendants given in regards to Donald Trump's inauguration. It became a huge meme for a while. 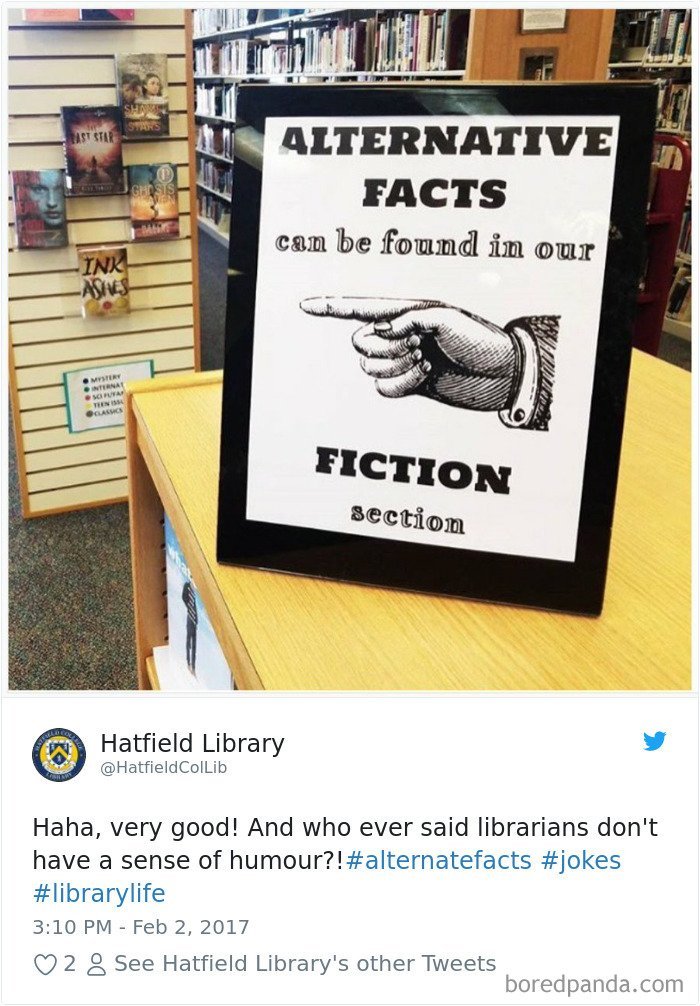 13. This sign is hilarious! We have to wonder how many times a squirrel stole Keith's lunch. 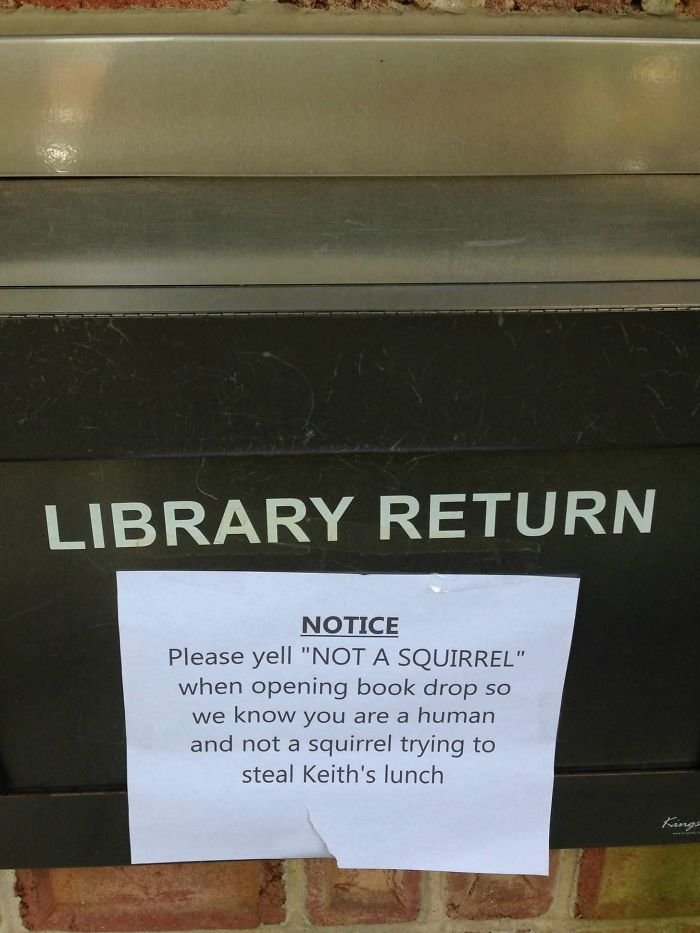 12. A true sign on a chilly sidewalk. You can also go inside the library for heat. 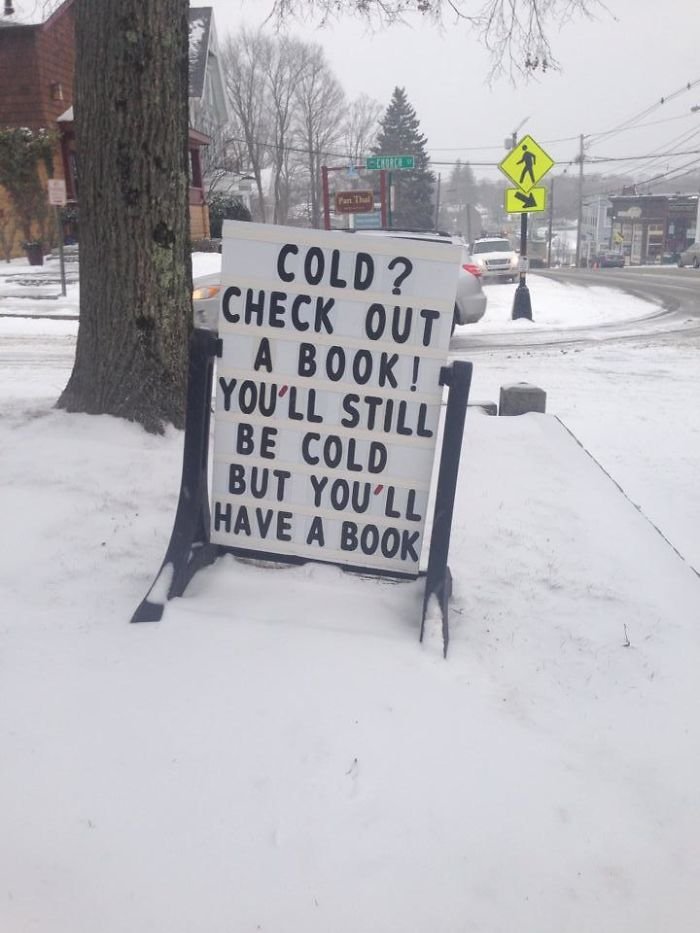 11. This is an interesting part of a library. It's like the movie 'Interstellar.' 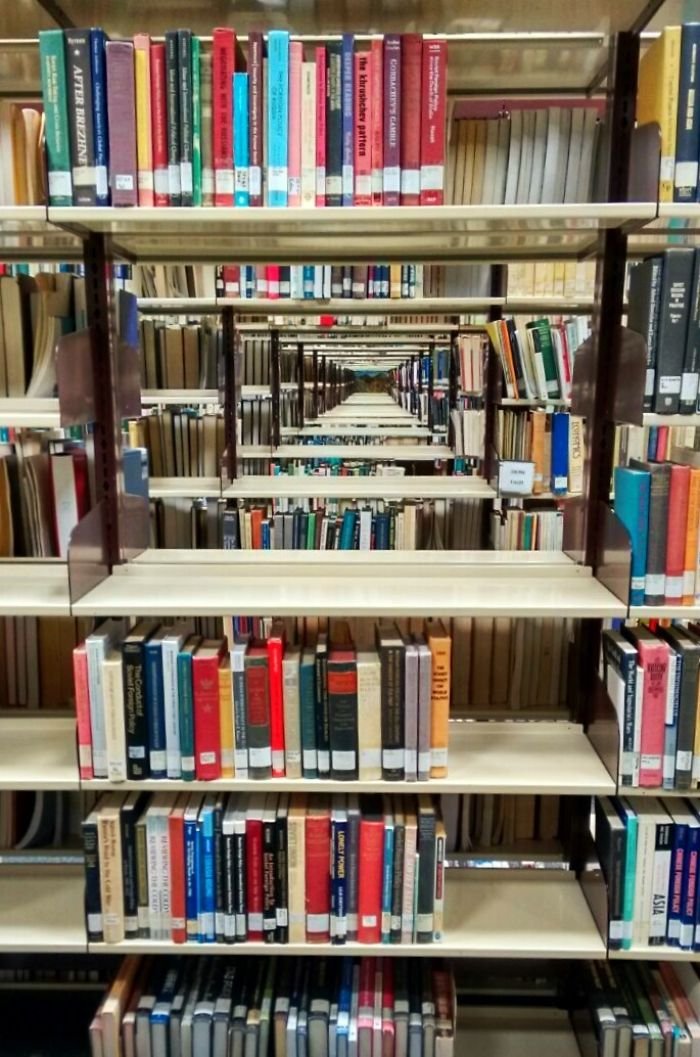 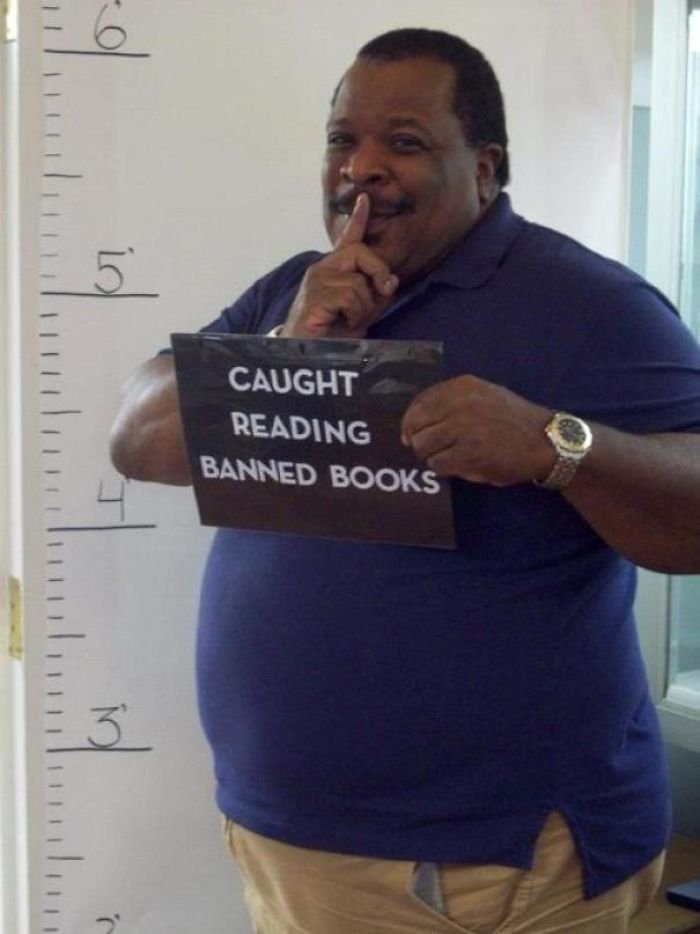 9. Can you remember the original Batman theme song? If so, you'll get this one. 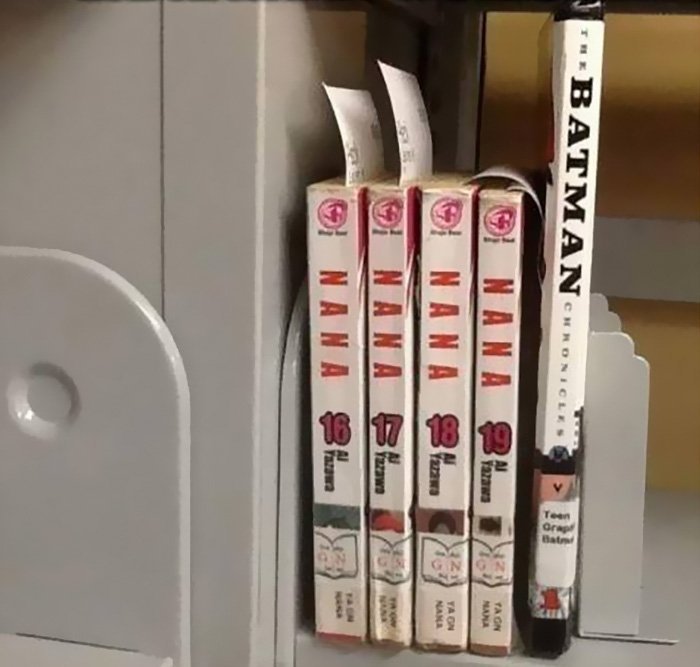 8. This is a pretty hilarious joke unless you're the person looking for a book in that section. 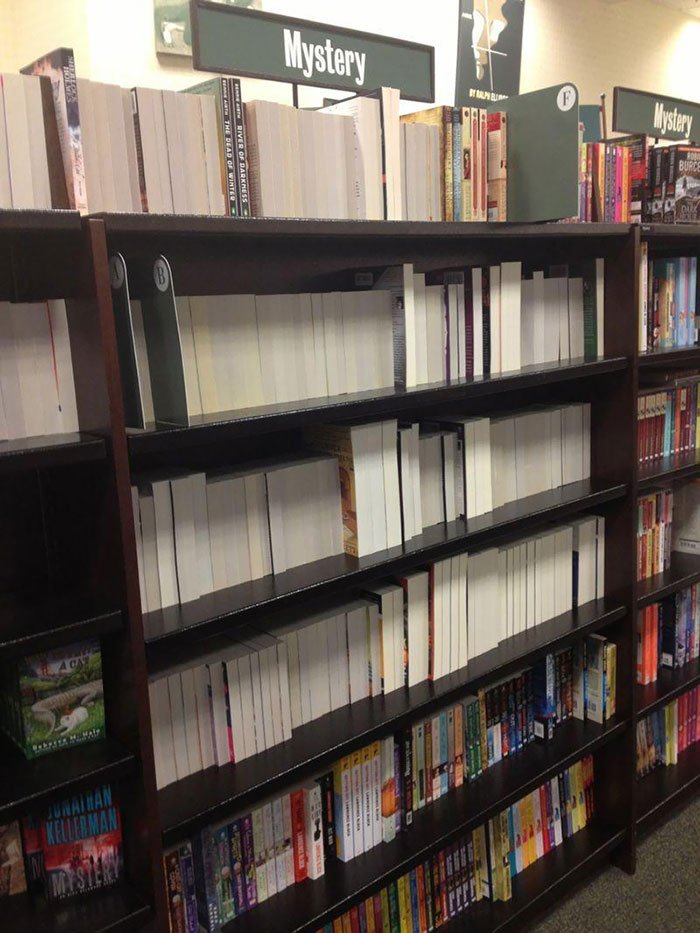 7. This is a 'Book Reaper.' This librarian dresses like that every year on Halloween to collect overdue books. 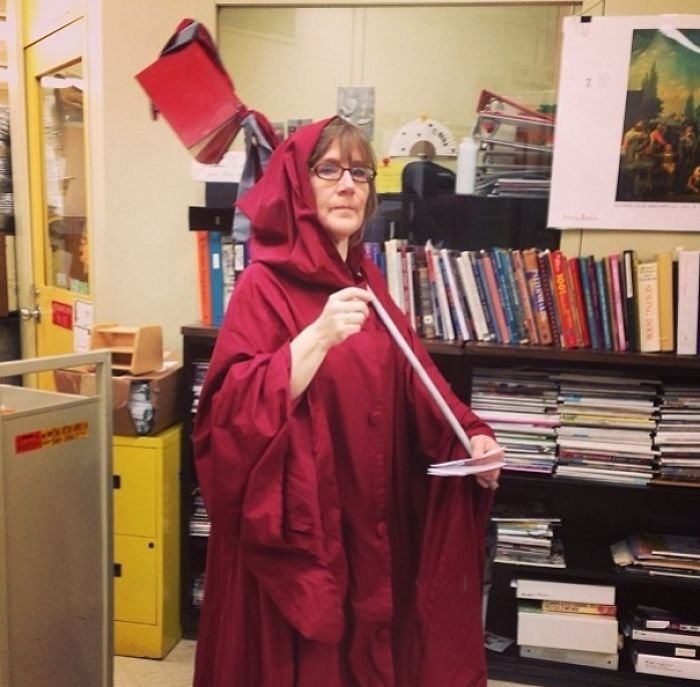 6. This library clearly thinks that people love pop culture. If Batman does it, then we all should too. 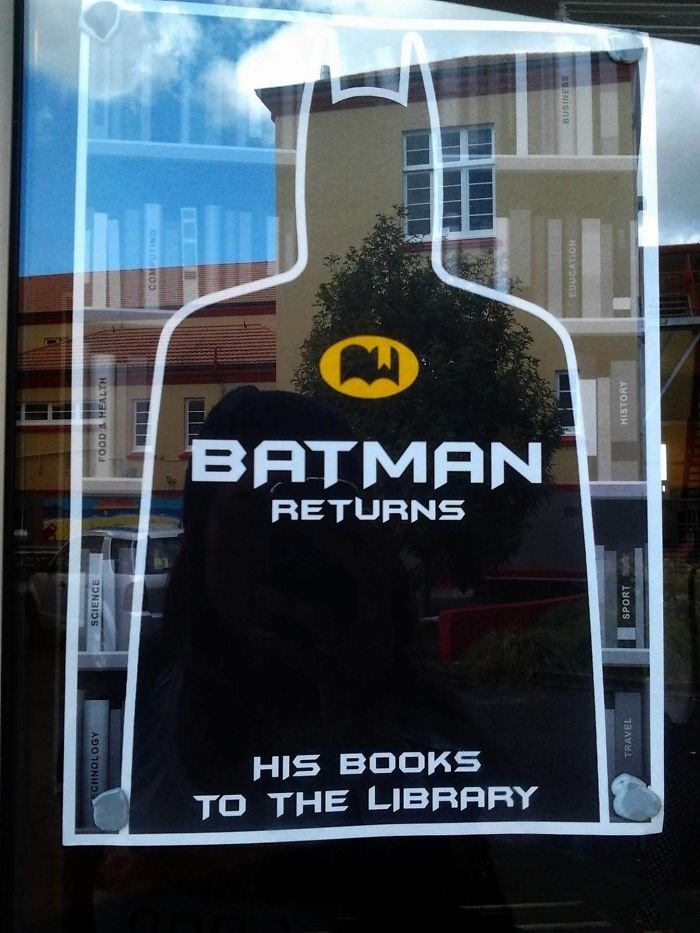 5. Awwww! Poor Max. Let him in the library, you monsters! 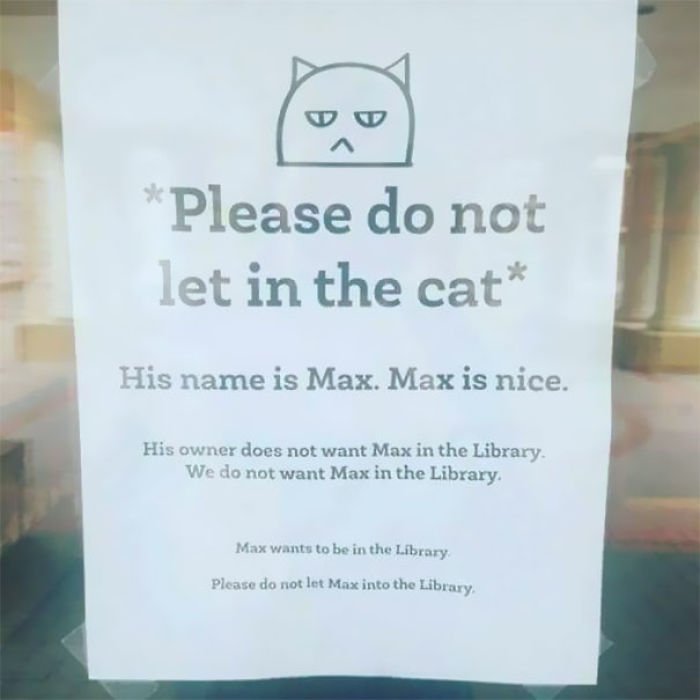 4. The best display ever! Procrastinators will definitely get a kick out this one. 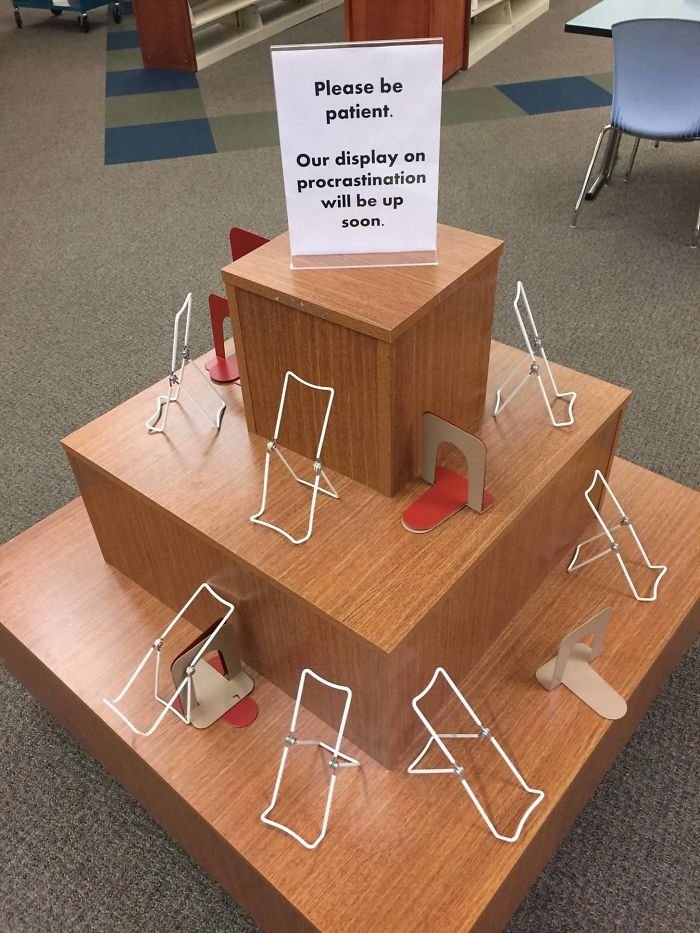 3. We don't know where we would be without the Thesaurus! But we're glad the others are gone! 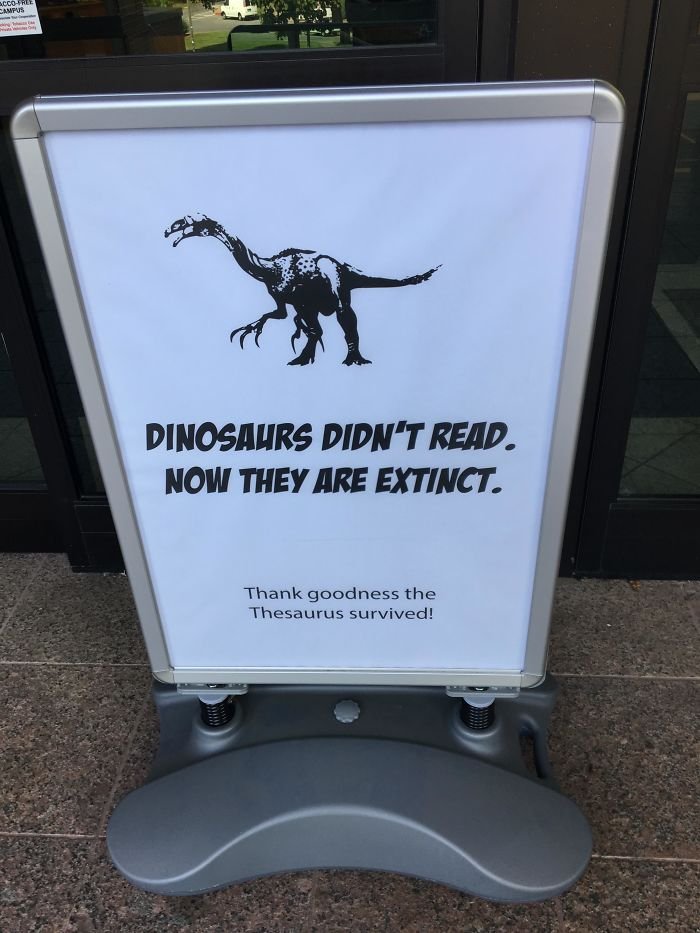 2. This is an amazingly clever display. Most of the time we remember the covers of books more than the title. 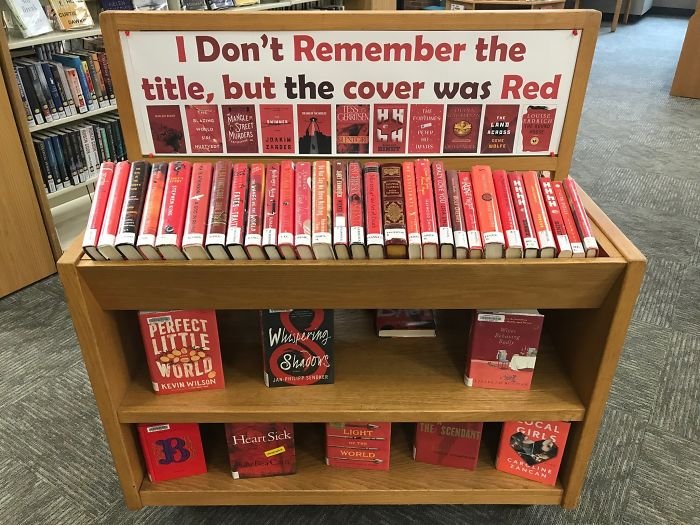 1. This librarian sometimes wears her Panda hat to work. Everyone who walks into the library is greeted by this. 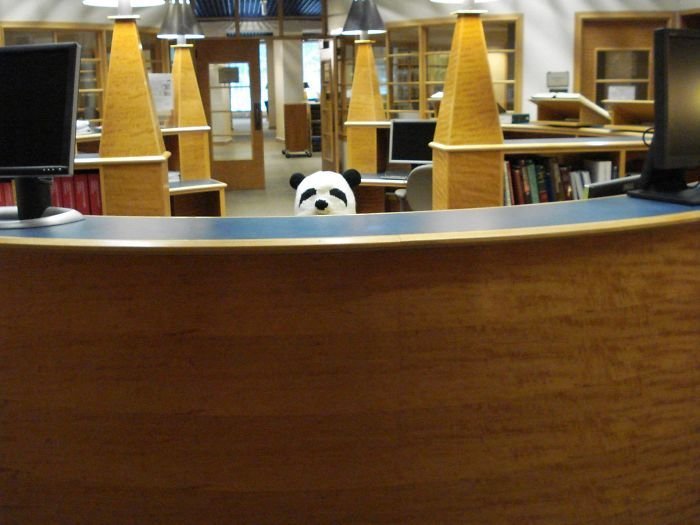 After seeing these pictures, we think it’s safe to say that librarians are not boring at all. They might not be the coolest people to the masses but their humor lies in words, puns, and special turn of phrases that make everyone smile.