15 People That Knew Celebrities Way Before They Were Famous

During life, we ​​meet many people, and although some of them become doctors, professors, or journalists, some of them can become real celebrities. Then, after 10 or 15 years, you go back to see the photographs of your yearbook, and you realize that you studied with a future millionaire or a famous Hollywood actor. In this small list of images, you will see a series of readers who inadvertently shared their youth with world-renowned figures.

15. This girl's aunt realized after many years that she met Bradley Cooper in college, long before he was famous. 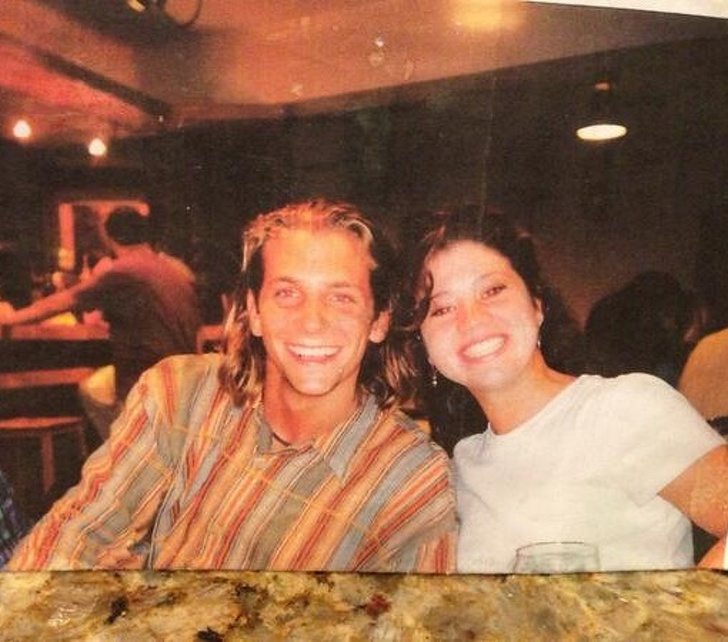 14. This girl's aunt went out with Ashton when she was young, and on the family albums, there are several pictures of him sharing with her family.

if anybody knows me they know that my greatest anecdote is that my aunt dated ashton back when he was chris so I thought I’d take this time to let everybody else know about my family treasure. that ugly baby is my brother. @aplusk you could have been my uncle pic.twitter.com/PYTYNOGJ4D

13. During high school, this girl's mother dated Adam Sandler. They even went to prom together!

12. The aunts on this list had excellent taste! This girl's aunt went out a couple of times with Leo and has several photographs with him at her house.

Just found these pics of Leo with my family...(he dated my aunt) wtf pic.twitter.com/nJ4BaPzGRL

11. The mother of this girl always said that she dated Matt Le Blanc for a while, and after many years she managed to find a picture of them together.

so my mom dated matt le blanc and she finally found a picture of them pic.twitter.com/kLQrEalmUB

10. This boy's mother dated Josh Hartnett during high school and did not even remember him until she saw him in a movie.

Turns out my mom dated a movie star in high school #pearlharbor pic.twitter.com/tWa76vTQ

9. This girl's sister dated Usher for a long time in high school and forgot to tell her family about that!

I'm dead my sis use to date usher in high school and she just now telling me this smh pic.twitter.com/FF9hEiARTC

8. A girl tells about the time in which her aunt went out with Jamie Fox, and the children of the family called him Uncle Jamie every time he went to visit her.

tbt to when my aunt dated @iamjamiefoxx and we called him Uncle Jamie😍😭😂 pic.twitter.com/41wHVmrZO3

7. They do not seem to know who the yearbook is, but the simple fact that Ansel Elgort appears in it shows that someone had a remarkable youth.

6. This girl's mother decided to wait until she was older to confess that she secretly went out with John Legend when her daughter was ten years old.

so my mom decides to tell me she dated john legend secretly when I was 10???? mom u let him go wyd..... pic.twitter.com/Mo97OVyoTw

5. It is always good to keep good friendships, much more in the case of this guy's uncle who is a very good friend of Queen Latifah.

My Uncle is good friends with Queen Latifah ✊🏾 pic.twitter.com/va05jkQyX1

4. And this girl's dad used to date Tisha Campbell, but she only recognized her as the girl from 'Martin.'

3. This girl's aunt went out with Jimmy Fallon, he went to her parents' wedding and was very close with her mother's family during that time.

2. Everyone on this list can boast of a celebrity, but this girl took the prize when she found Michelle Obama in her uncle's yearbook.

1. A friend of this girl went to high school with Zac Efron and had to take out his yearbook to prove it because she did not believe him.

I just found out a friend of mine went to high school with Zac Efron. He pulled out his yearbook as proof and 😂😂 pic.twitter.com/6mHtaUJzk8

Having a celebrity among your friends should be something exciting, and sure some of them are still in contact with their old friends from college and high school, however challenging their agendas are today. What famous person would you like to be friends with and why? Answer us in the comments and remember to share this article with all the people who need to see a more human side of celebrities.